This document shows a history of all versions of Streamtime Classic

Written by Nate Mateu
Updated over a week ago

This document shows a history of all versions of Streamtime Classic - the most current up to date version being at the top of the list.

– Minor security updates around the ability to create more secure passwords and displaying information on those passwords (for GDPR).
– Various small improvements and optimisation.

CONTACTS
– Added function to filter special characters from client code
– Copy postal address to physical address only shows warning on overwrite (not when fields are already identical or empty).
– Company details and company list now use the same dropdown value list for the sort field.

QUOTES / ORDERS
– Quotes and orders can be deactivated in batch (with alt key), even when they are already locked.

JOBS
– Speed optimisation of job cost screen (recorded time & materials)
– Navigation issue from jobs financial overview advanced search resolved.
– Job cost report not generating errors anymore in PDF readers.
– Improved job screen navigation so user with full access always sees $$ values of time entries instead of start/end time.
– When moving a task from one job to another you have the option to move all related time entries along or keep them on the original job
– In the job cost, recorded time & materials, it's easier to see which time entries were not made against a task.
– When prompted to make a task from a time entry, the notes from the time entry are used in the task description
– Fixed issue where you could add a tasks if a job is locked or you don't have scheduling privileges, but you couldn't edit it.
– Improved job numbering when duplicating jobs with alternation.
– Fixed issue where estimated time on a job was not correct after changing ET on one of the tasks. The task would show up with a ? and the totals wouldn't add up.

MISCELLANEOUS
– Financial Year is automatically updated to this year. Default invoice list only shows invoices from this year.
– Better mechanism for updating all records when you change the branch code.
– When creating a new branch, all fields are prepopulated from the home branch.
– Fixed issue where new branch would be assigned the same code as an existing branch.
– Added function to filter special characters from the staff code, e.g. Bob O'Neil becomes BON instead of BO'
– Error checking on default statuses in the setup. Problems will be highlighted to help you find and fix errors.
– Client Code and Client ID are now available through Streamtime API.
– Project number now available in GET requests for jobs.

- NEW “Replace user” option from System Setup, replace an old staff member with a new one.
- NEW effortless, silent activation (no user effort required)….
- Many other issues have been fixed…. see details below.

REPLACE USER PROCESS
- NEW “Replace User” from System Setup, swap out an old employee for a new one.

REPORTS
- Timesheet Summary (Weekly) Report will now display staff members who have been deleted from the system.
- Fixed issue in “Client Income vs Time Logged" report where total cost of time was not showing.
- Fixed issue in Client Revenue report which may affect invoice totals in this report.

UI CHANGES
- Removed current record indicator from all list views & replaced with Active Record highlight
- Added dialog to prevent creating new quote from a locked Job.
- Fixed errors appearing when accidently tabbing (manually or via scripts) into Exchange Rate fields.
- Creating a new Cost Matrix Item is now enabled for ALL departments by default.
- Department is now required field when adding new staff members.
- Duplicating a Purchase Order will now give the (new) Order the default Order Status from System Setup.
- Duplicating a Quote will now give the (new) Quote the default Quote Status from System Setup.
- Removed currency symbol from the Print-Invoice|List layout.
- Updated lookups for Job Address 1, 2, & 3 fields to the related companies physical address.
- Fixed issue where Job Progress Bars would not update when deleting time entries with no associated task.

FINDING RECORDS
- Improved Advanced Search, clicking search should resume script
- Improved QuickFind script where no records found it would keep the existing found set instead of showing (no records)

NAVIGATION
- Fixed issue where Streamtime window not maximizing after transferring PO line to Quote
- Fixed issue in System Setup ... clicking the arrow next to a staff member would not take you to the detail view of that staff record
- When navigating away from Job List > Financial view and back, your position is now remembered
- Fixed error where creating a new pricing tier would forget which Cost Matrix record / found set you were on.
- Added option to install Streamtime's Plugin “Later” so if users are having plugin issues, they can continue working
- Fixed a error where users could not click ‘Show Total On Quote’ when printing Quotes

SECURITY
- Added new logic to change user’s password from System Setup
- Modified security regarding when users can modify an invoice... now only on the invoice lock status
- Improved Partial access to Job Costs. "Searching ‘entries” the total time used was not recalculating

We've made several changes to the underlining structure of Streamtime, which has helped to improve performance in several areas including the Job List. This is an ongoing effort minimise work done on both the FileMaker client and FileMaker server side.

To get the most out of Streamtime 14, we strongly recommend you use both FileMaker Pro 13 and FileMaker Server 13 as some data intensive tasks are now passed off to the server to complete so you don't have to wait.

Performance is largely dependant on how much data you have in Streamtime and the state of that data. In this release we've added new tools which makes it easy for you to manage your data by batch locking and completing items.

To learn more about optimising your Streamtime database for best performance please take a look at the following article:

When you log into Streamtime for the first time and navigate through the tabs, you’ll be presented with a different found set of records than in previous released.

Minimising the amount of records sent from the server to the client speeds things up.

Here's what is downloaded when you navigate to different tabs:

Job Locking has a 'cascading' effect

Locking a job will now lock all related Quotes, Orders & Invoices and will PROMPT you if you'd like to complete any incomplete tasks.

Go to the task list, in the “Task” Menu at the top of the screen, you now have the option to batch complete all tasks in the found set... doing so improves performance of your Task Calendar and Gantt chart views.

If you're billing a client the same amount over and over again, or if you'd like to set up an invoice template that you can re-use for multiple clients, you can now create an invoice once and then duplicate it.

There have been numerous other bug fixes and improvements.

Please Note: Streamtime 14 is not compatible with Windows XP

- Changes to Cost Matrix behaviour when deleting or editing items.

- Significant UI changes across the entire solution, please watch this video before you update to see all of the changes - there are far too many to list all of them here! 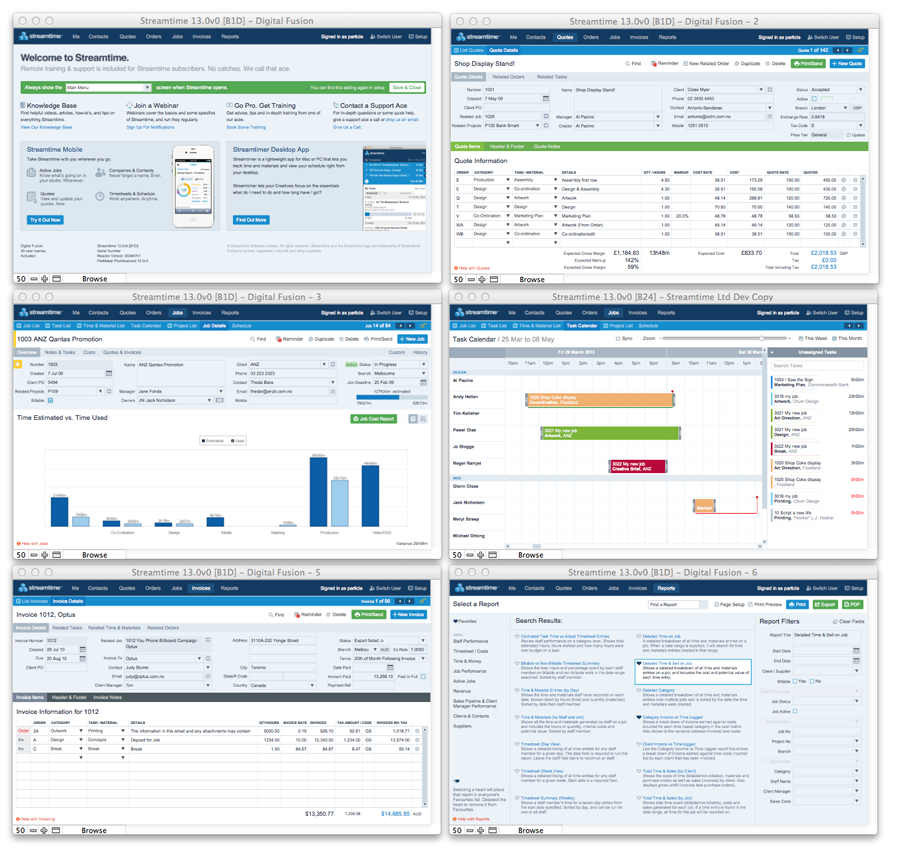 Some of the main chances include:

- New quick search in many layouts

- Smarter use of quote and purchase order status (Active/Reportable)

- New file format to support and work with FileMaker 12. (note this version only works with FileMaker 12 and above)
- Significantly faster performance of all add ons - approximately 10-20 times faster than previous versions of Streamtime.

11.0v4 [A0B] - released August 2012 - this is the final version of Streamtime to work with FileMaker 11 before we ported the database structure over to FileMaker 12..

- General Performance enhancements
- Fixed activation issue that took a user into an endless loop during reactivation.
- Fixed an issue with Blank tasks randomly appearing in Streamtime.

WARNING - Unless you are upgrading from 11.0v3 [9EF] then this upgrade may take several hours to perform. See notes against 11.0v3 [9EF] for details.

- Fixed the record button in the ME tab intermittently not recording on some tasks.

WARNING - This upgrade will perform significant optimisation on your Streamtime Database and if you have many time entries in your copy of Streamtime it may take several hours to perform.

- Improved performance when running calculations on large jobs to avoid 'processing records' message.
- Job Invoicing > Summary now supports multiple currencies. All values conniver to home currency.
- JCR updated to allow PO and Time costs to be displayed in the currency assigned to the job rather than the currency of the home branch.
- Job Tracking > Add time window reverted to previous layout allowing for user and day to be edited.
- Issues with budget report resolved.
- WAN performance improvements.
- API now available.

- Streamtime version is Streamtimer v2.0.6 compatible. BETA tag removed from Streamtimer.
- Allows payment terms to be added to quotes without the need for a job.

- Performance of list views in Job Tracking and Invoicing tabs have been improved so calculations are performed far more efficiently and has resolved the 'Updating Records' progress bar experienced by some clients.
- Updated iPhone app to display customised Quote status'
- fixed search to find Quotes with a status of 'Quote in Progress'
- Quote line items with a $0.00 amount will only display the description. This is handy for those wanting to insert headings into their quote.
- Fixed window resizing issue when adding time via a PC.
- Courier label is now available to print via the Job Tracking > print centre.

- Series of fixes in the Me/MyTasks screen, better search, more sorting, add time to any job from that screen
- Popup timesheet from Me / MyTasks tab
- record time directly onto the JobTracking/tasks
- Improved hyperlinking between task list back to job details
- Multi select staff in tasks with FileMaker 11 on Mac
- Xero integration
- Calendar fixes
- Fixes to Activation
- Preference in Job Tracking to turn off "task does not exist do you want to create one" every time you add time
- Fixes to Sage export script
- Fixes to Quickbooks export

10.0v4 [8CA] - released June 21st 2010
- Printing from Correspondence screen fixed.
- Applied checks for FileMaker Pro 10 if updating to this build. Going forward user must have FileMaker Pro 10 to be able to run Streamtime. New functionality in the system not compatible with FileMaker Pro 9.

10.0v4 [834] – released December 23rd 2009
- Warning applied when trying to complete or delete a task that the stopwatch is running on.
- When the "New" button is clicked in the Job Tracking screen user is asked whether they are sure they would like to create a new job.
- Linking from a Tender & Order to a Quote fixed.