All Collections
Streamtime Classic - 'How To'
Time Tracking
How do I see extra time spent on a job?

How do I see extra time spent on a job?

This article helps project managers find time entries that were not recorded against tasks.

Written by Miel De Rycke
Updated over a week ago

Generally jobs are broken down into tasks and everyone records their time on the tasks to allow tracking progress on each task and the job as a whole. 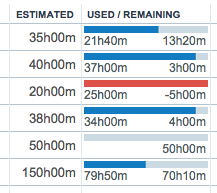 You will see that extra time was spent on the job when the "Total Time Recorded against non Scheduled Tasks" value is higher than 0. In the example below we have recorded 203.5 hours, 6 hours of which were 'not booked on scheduled tasks'. (Of course, if you don't have any tasks on the job, both numbers would be the same).

The 6 hours could be one time entry, but it could also be the sum of any number of individual entries, making them harder to identify. In Streamtime 14.0v4 the list of time entries will have colour codes on the left hand side.

When there are not tasks on the job, no colours are shown.

Identifying which task each time entry was made on

Additionally, you can also tell which task each time entry was made against. In the example below there are 2 tasks for Wireframing, both assigned to JTr.

But unless JTr specifies in the notes what he was doing, it can be hard to tell whether he was working on the first or second task.

So from 14.0v4 on, you can now hover over the green mark, to see details of the matching task.

If there was no task in the first place, you'll just have to add one. Once a task exists, you can simply go back to the recorded time & materials and click the edit button.

Then, in the next dialog, without changing anything, just hit save again. Upon saving, Streamtime will try to match the time entry with the corresponding task again.

In case there are multiple tasks of the same type, you will get to choose in the next dialog which task the time entry should be booked against. 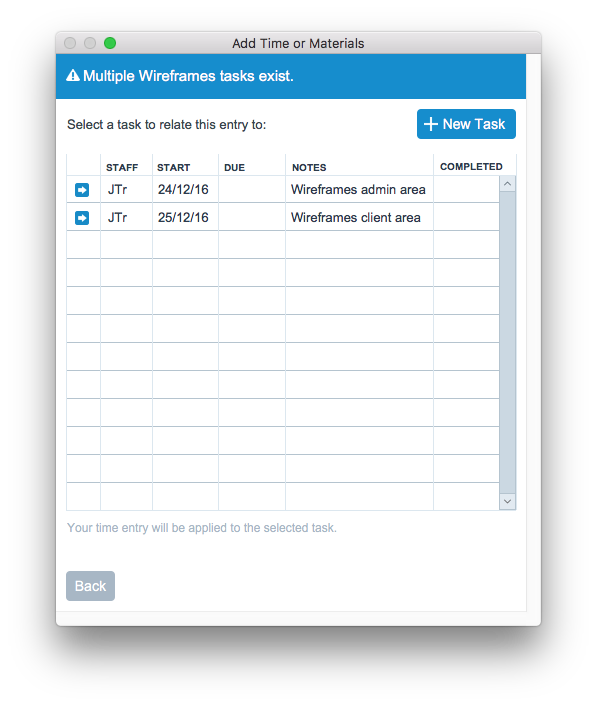